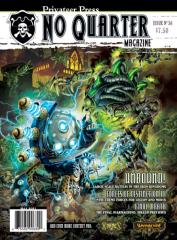 Previews of WARMACHINE: Wrath continue in No Quarter #36! This issue also features rules for Unbound, the awesome new large-scale battle system for WARMACHINE & HORDES; and two exciting new Theme Forces for Legion of Everblight and Mercenaries. Plus, Guts & Gears delves into the terrifying Farrow War Hog, and Power Progression shows you how to build an unstoppable Circle Orboros army! Never miss an issue!

Last issue they dropped a hint that "something big" was coming to WARMACHINE. Naturally, my mysterious announcement spurred all manner of speculation in our player community. Conjectures included more battle engines, a new faction, and even a return of the Orgoth. However, I dare say what we actually have in store for you this issue is much bigger than any of those things.

My colleagues are pitiful fools. The scope of my great labor is far beyond the confines of their narrow vision. Their own experiments and philosophies suggest the rational course that I would follow, but they are cowards who fear what they might learn should they guess what I have begun to comprehend. Flesh and bone are governed by the same alchemical laws as all other matter, what of it should I wish to test the limits of those laws; press the boundaries to their breaking point and beyond? After all, if flesh can be manipulated, it can be perfected. Life itself can be perfected beyond the blind choices the gods made in remote antiquity!

Nothing makes a statement like a great banner flying in the wind, proudly proclaiming devotion to country and cause. Many Iron Kingdoms models display banners of all kinds, but we'd like to see you expand on that idea. Add a banner complete with faction runes, heraldry, or a statement of your choice to any model that doesn't already have one. We want to see your banners fly!

Last year for convention season, certain brave members of the Privateer Press staff joined together to paint massive armies for an epic mega-battle. For my part, I contributed the template by which each army would be painted. The project was so successful we decided to repeat it this year. In addition, these giant armies will be featured in an epic Battle Report in the pages of an upcoming No Quarter. Once again, I provided the step-by-step method we used to paint 150 points of Skorne in a paltry six weeks.

The following rules are intended to augment the experience of playing large-scale WARMACHINE and HORDES games. These rules are optional and feature a new alternating sequence of play that keeps both players involved constantly throughout the game. Instead of replacing the rules of WARMACHINE and HORDES, these rules instead modify the structure of play while leaving the core mechanics untouched.

It was the aesthetic and back-story of Circle Orboros that first drew me to the faction and ultimately to HORDES. As a Celtophile, the opportunity to field a tuath of shape-shifting barbarians or element-wielding druids held huge appeal. And the play style of Orboros circled it as my primary faction for tabletop battles.

Greetings, Cadet! Welcome to the Strategic Academy here in Corvis! You've just passed your entrance exams and are on your way to serving our crown. Before you are assigned your training company, I will ensure you have a proper understanding and respect for those who came before us. You will discover the legendary names that strike fear in the hearts of our enemies and the tools they use to protect what we all hold most dear. Perhaps one day after graduating from this academy you may join their ranks.

Gemstones adorn many models in the Skorne, Protectorate of Menoth, and Circle Orboros factions—apparently primal zealotry is measured by the quantity of family jewels. Much like a hip-hop entourage, the tribal armies devoid of military conformity still have a means to distinguish who's in charge—it's the one in front with all the sparkles. Of course, doing justice to all those bumps on your models isn't as straightforward as the standard coat, highlight, and shade.

Scenery plays an important role in creating a convincing battlefield environment. Often, the buildings, obstacles, and objectives bear most of the burden when generating the appropriate aesthetic, but there's no reason more mundane terrain features, such as hills or woods, can't convey the same theme.

Also in this Issue!

» Browse other products by Privateer Press
Home Back to Results