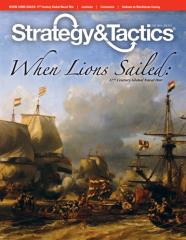 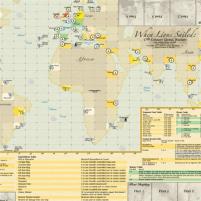 When Lions Sailed (WLS), designed by Joseph Miranda, is an intermediate-complexity wargame of global naval conflict in the 17th century. That era saw the beginning of a naval technology revolution that set the pace for Western expansion over the next two centuries. The game can be played by two, three or four, each representing a different nation: Netherlands, England, Spain and France.

Each game turn represents one year. Each operations phase represents several weeks of campaigning, depending on the overall tempo of operations at any given time. Each ship unit represents six to 12 vessels. Each regiment represents about 1,000 men. The game system is an evolution of the one used in our earlier games: 1066, Hannibal’s War, and Frederick’s War.

Articles in this issue: