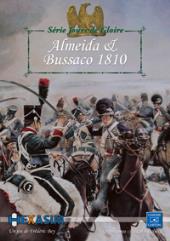 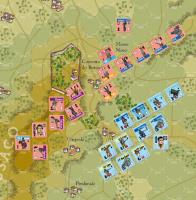 Please note that this is a DTP (Desk Top Publishing) game designed on a desktop computer and all components, including the counters which will have to be cut and mounted, are printed on paper. These are designed by some very well-known designers and are a low cost alternative to today's professionally produced games. On rare occasions, some of these games are reproduced by other companies with higher quality components including die-cut counters but most of them are not. If you believe this game to have a professionally produced version, please contact us with your inquiry and we will help you to locate it if it does indeed exist.

In April 1810, Napoleon assigned to Massena, the hero of Aspern and Wagram, the mission to hunt Wellington Portugal. The invasion route chosen is that of the North, it passes through Ciudad Rodrigo and Almeida. The French offensive started at the end of June.

July 24, Marshal Ney, with the vanguard, defeated General Craufurd under the walls of Almeida and rejects beyond the Coa River, as a prelude to the seat instead. The French then enter Portugal. Their advance was slow and difficult.

As for Wellington, he gathers his army on the formidable position Bussaco. September 27, Massena ordered a frontal attack from the English line of defense. After a fierce battle, he chose to give up and stops fighting. He will find that the next passage to bypass the Sierra de Bussaco. With these two battles, the terrible duel between Massena and Wellington has launched!

Almeida and Bussaco 1810 is a new installment in the series Glory Days. It has 3 battles of the year 1810 between the French army and Anglo-Portuguese.

The Battle of the River Côa (Almeida), June 24, 1810. Ney has been charged by Massena to seize the fortress of Almeida. For this, the Duke of Elchingen must first beat the English forces that cover the city.

At the foot of the fortress of Almeida, the division sells Crauford under the onslaught of the sixth French corps.

Then the battle of Bussaco taking place September 27, 1810. The Anglo-Portuguese army of the Duke of Wellington was firmly established on the heights of the Sierra Bussaco.

At dawn, at the foot of the convent of Bussaco, the French right wing soars to attack the British positions.

Finally, the battle of Coimbra. On 1 October 1810, the vanguard of the Army of Portugal under General of Cavalry Holy Cross meets the rear guard of the allied army under the command of General Stapleton-Cotton.

Each battle is accompanied by a historical scenario and one or two alternative scenarios (for example: what if the division had joined the Picton battlefield Almeida?), 7 scenarios in total.

Days of Glory series aims to cover the major battles of the Napoleonic period following the chronology of the bicentenary of them. The battles covered engaments small to very large battles, which are simulated on a scale from one battalion to the brigade. The game time is 1 hour for smaller battles up to 15 hours to larger ones. Including those of Almeida-Bussaco, 32 battles have been published to date by Vae Victis cards and Canon.

The rules are based on the activation of each army formations, through the random selection of activation markers. Each player is placed in the shoes of commander in chief, has a limited number of orders, which requires him to manage the priorities of his battle plan.

The game features units and the orientation of the main formations or attitudes of combat: set square cavalry charge and artillery fire.

Specific rules for each battle in addition to the common rules, particularly through specific activation markers, in order to optimally realize the context of each battle.

» Browse other products by Canons en Carton
Home Back to Results