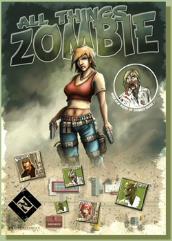 Sold Out
Last Stocked on 6/1/2020
Have one for Sale or Trade?
All Things Zombie (2nd Printing)
by Lock N Load Publishing
Category: Board Games
Genre: Board Game - Horror
RPG - Horror
Miniatures - Horror - Rules

Rest assured this is the second printing of the game with the stronger box, glossy coating, and that we check every copy for the Buffey counter that has 3-3-1 on the back.

Each counter represents one survivor or one zombie. You choose your star, your “mini-me” if you will, and arm him or her with one of four weapon types. But you’re not alone as you then recruit a few other survivors to form your group.

Then it’s off to explore a beautifully detailed map representing deserted cities, suburbs, and rural areas. But are they really deserted? Not if you count the zombies, the seemingly endless hordes of zombies. But soon you realize that the zombies may be the least of your worries as you run into other survivors. Are they friendly or hostile? Well, the game mechanics determine that. With luck you can recruit them to use in future games. But sometimes it spins out of control

Which leads us to combat. There’s two ways to have combat in ATZ. Trust me on this; shooting is what you want to do. Yes, when facing one zombie it’s easy to handle him in hand-to-hand combat but get them in bunches and that’s when they are really dangerous. Better to shoot them from afar. Better to shoot survivors too.

Where and when you explore determines how many zombies and survivors you’ll meet. Stick to the rural areas in the daytime and your chances of running into zombies are slim. Prowl around at night in the cities and you may have more zombies than you can handle. Why go there then? Because that’s where you can find the most stuff. Better weapons, medical supplies, even the cure to the virus. But hey, it’s up to you.

The Reaction System is only one piece of the game mechanics that allow the game to be played either solo, on the same side with your friends, or head to head. But whatever you choose to do the Zombies are handled by the game mechanics so it’s always survivors versus zombies.

ATZ can be played as a one-up game or as a campaign where you link the adventures of your group together to tell your story. The more missions you go on the more experience you gain. As your experience grows your characters increase in ability while increasing the size of their group. In the beginning the goal of ATZ was to survive. But now as you grow in numbers and skill it’s time to rebuild the world except maybe this time with you in charge.