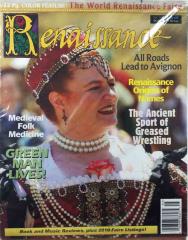 The Ancient Sport of Greased Wrestling

What's the oldest continuously running sporting event in the world? Since 1362, Kirkpinar, or Turkish greased wrestling, has survived conquests, invasions, migrations, and wars. For the competitors, Kirkpinar is the ultimate goal in their pursuit of the title of Pehlivan, or champion. The ladies love the bare-chested guys in their greased leather pants, too!

We reveal how ancient folk medicine relied on the herbal remedies of plants, flowers, tree bark, superstitious beliefs, and mysticisms that were passed down from generation to generation. These "collected" remedies were administer by the local healers (mostly women), shamans, or witches in the forms of herbs and potions along with incantations, spells and other rituals.

You see him lurking everywhere in historical buildings around Britain and old Europe. His face can be found, half-hidden by surrounding leaves and long vines sprouting from his nostrils and mouth, on the cornices of ancient European buildings and atop Roman columns in Gothic cathedrals. We introduce you to this elusive and mysterious forest spirit.

"All roads lead to Avignon," or so went the saying when, in 1305, Pope Clement V moved the papacy from strife-torn Rome to a peaceful, Provencal town in southern France. We visit the town that drew great intellectuals, artists, musicians, and astronomers, paving the way for the French Renaissance.

A Tour of Battle Abbey and Battlefield, Hastings

Looking out over a green expanse of gently rolling farmland, dotted with piles of newly mowed hay, it's hard to believe that the most famous battle in English history was fought here. We take you to the towering ruins of the old stone Abbey and imagine the quiet English countryside as it would have been on 14 October 1066: In just over one square mile thousands of Saxons and Normans fell in the Battle of Hastings.

Ever wonder where names like Allison, Pamela, Warren, Olivia, and Emily came from? We explore the wonderful world of renaissance names and reveal their origins.
» Browse other products by Renaissance Magazine
Home Back to Results