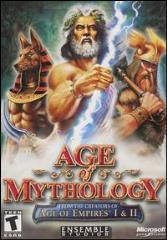 The mountainous pyramid looms over the city as Pharaoh prepares his troops for battle. Slithery wadjets and giant scarabs shuffle restlessly behind the front lines of swords and spears. To the east the enemy waits, a great Grecian mob led by godly heroes and bolstered by deadly centaurs and powerful cyclopes. Countless warriors watch anxiously, knowing most of them will fall before the end of the day, when yet another army appears on the horizon. Like a distant thunderstorm coming fast from the north, mystical valkyries and bow-wielding trolls join a horde of huskarls to follow a great Viking warlord as he leads them towards the battlefield.

Three of the world's most celebrated ancient mythologies come alive for real-time warfare in this strategy game from the developers of the acclaimed Age of Empires series. Players choose to lead the Egyptians, the Greeks, or the Norse, each quite different in terms of available units, special powers, and methods of resource collection. The Greeks offer a balance of good offensive and defensive capabilities. The Norse are aggressive, driven by conquest and expansion. Sturdy and resilient, the Egyptians defend themselves well and are difficult to overcome.

Along with the obvious differences between these three main mythologies, each culture is divided into three subsets, each of these associated with a different major god, for a total of nine playable factions. Gameplay as one of these sub-cultures is further defined by its deity, as each god offers additional influence over the game world, related to his or her mythological realm. After deciding to play as the Greek culture, for example, players can then choose the tough infantries of Zeus, the strong cavalries and unique water units of Poseidon, or the durable infrastructure of Hades. The Norse can choose from Odin, Thor, or Loki. Egyptians follow Ra, Isis, or Set.

Fantastic creatures fight tremendous battles and new legends are forged in the Age of Mythology, but fans of Ensemble's earlier work will be pleased that the game retains and builds upon many of the best features of the Age of Empires titles. Cultures advance through four ages, each leap allowing new buildings and technologies. Each of the major gods also has associated demigods, more of whom become available with each cultural advance. Also like Age of Empires, Age of Mythology is designed for balanced play throughout its many layers of complexity, with subtle diversities among the cultures and sub-cultures to allow and encourage a wide range of real-time strategy gaming styles.

For Windows
» Browse other products by Microsoft
Home Back to Results