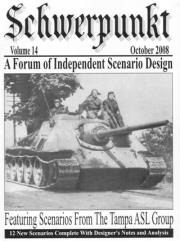 This issue’s 24-page booklet contains: Brook White's The Sword and the Shield: The French Army 1940-1945, as well as our trademark analyses and designer’s notes for Scenarios SP157-SP168. Each of the 12 scenarios are printed on cardstock in our easy-to-read format. The scenarios are in keeping with the Schwerpunkt tradition of tournament-sized as well as medium-sized actions. There's something is this pack for players of all experience levels!

SP160 The Lost Band Of Edmontons: Leonforte, Sicily, 22 July 1943: An isolated group of Canadians hold out against a German counter-attack while awaiting reinforcements to resume their own attack to clear some hills. This scenario uses boards 2 and 41. Game Length is 7 turns.

SP161 Federov's Incursion: Obol, Belarus, USSR, 23 June 1944: A Company of German infantry with StuG IIIGs and reinforced with Nashorns, attacks to clear a Russian sub-machine gun company reinforced by T-34/85s and an SU-85, from the village on board 42. Game Length: 7 turns.

SP162 The Buddha's Belly: Sittang, Burma, 22 January 1942: This Brian Williams design features the Japanese 33rd Division conducting a a delaying action, simultaneous with an attack to clear elements of the 1st Burma Division off of a hill. This scenario uses boards 32, 42, and 50. Game Length: 8 turns.

SP165 A Promise Fulfilled: Corregidor Island, The Philippines, 16 February 1945: Hugh Downing gives another Philippine action. Here, the 503 Parachute Infantry is attacking from board 47 to clear the Japanese from the hill on board 50 . Game length: 6 turns.

SP166 Blue Jacket Attack: Bataan Peninsula, The Philippines, 23 January 1942: Mike Faulkner rounds out our PTO selections with this Light Jungle expedition that has a mixed force of Naval personnel and marines attacking from board 39 to clear the Japanese off of board 40.

SP167 Trigger Happy Joes: Marnach, Luxembourg, 16 December 1944: Pete Shelling pulled this baby from his Bulge archives. It features elements of the 2nd Panzer Division attacking with PzIVs and jgPz IV/70s to clear the American 110th Infantry from the village of Marnach. Boards 42 and 46 are need to play this scenario. Game length is 6.5 turns.

SP168 Muhlenkamp's Miracle: Kovel, Russia, 2 April 1944: Pete Shelling rounds out this year's line up with another of his Eastern Front specialties. This one has elements of the 5th SS Panzer Division attacking with infantry and Panthers to clear a troublesome group of Russians from along the road on boards 13 and 38. Game Length: 6.5 turns.
» Browse other products by Sherry Enterprises
Home Back to Results