Operation Barbarossa - The Struggle for Russia 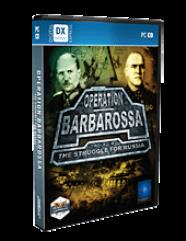 The Fate of the Eastern Front is in your hands!

On June 22, 1941 an avalanche of 153 German divisions crash into the Soviet Union and the largest military operation in history is begun: Operation Barbarossa. In this elegant turn-based strategy game, compelling gameplay combines with gripping history to create an addictive mix.

Aimed at all levels, from those who have never played a wargame before to those who know the history of World War II in detail, this is an entertaining and mentally challenging game of combined arms strategy. Your armor, infantry, artillery and air units will follow you through the most crucial battles of the Eastern Front. You will be able to choose from 47 different upgrades and improvements for your units as well as add new forces based on your success in the campaign.

Take command in two German and one Soviet campaign as well as individual scenarios and determine the fate of the Eastern Front. When you’ve played through all the campaigns and scenarios, try your hand at the editor to create new scenarios for yourself or to share with others!