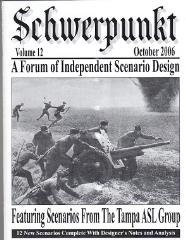 This issue’s 24-page booklet contains two articles: Brook White's, Bring Up the PIAT!: The British In ASL and Rusty Witek's The Languages of ASL, Part 2: Text and Talisman, as well as our trademark analyses and designer’s notes for Scenarios SP133-SP144. Each of the 12 scenarios are printed on cardstock in our easy-to-read format. The scenarios are in keeping with the Schwerpunkt tradition of tournament-sized as well as medium-sized actions. There's something is this pack for players of all experience levels!

SP133 Old Hickory's Path: Elements of the 120th Infantry, 30th Infantry Division and their supporting M-24 Chaffee tanks attack to clear Kirchellen, Germany of a tough group of Panzergrenadiers and halftracks and guns. This is a medium-sized action set on four half-boards: 17, 32, 37 and 38 offers many course of action choices for both sides, giving this scenario lots of re-playability.

SP134 Barracuda!: British infantry from the 49th Polar Bear Division attack on boards z and 49 to gain Phase Line Barracuda at Fontenay Le Pesnel, France. This 1944 action is a brutal village slug-out featuring Sherman-supported British infantry along with an AVRE attacking the 12th SS Panzer Division. With flamethrowers on both sides, someone is going to get hurt.

SP135 Tale of the Comet: British Comet tanks and Infantry from the 11th Armoured Division attack German infantry and a StuG IIIG defending Tecklenberg, Germany on boards 46 and 50. This 5.5 turn scenario is perfect for tournament play and is destined to be a classic.

SP136 Orczy Square: This is Schwerpunkt's first Axis Minors scenario designed to support Armies of Oblivion. Set on board 45, a strong force of Hungarian Infantry with Zrinyi support, counter-attacks the Russian 317th Rifle Division in Budapest, Hungary in 1945. This fast-playing, 5.5 turn scenario is suitable for tournament play and will challenge both players.

SP137 The Bozsoki Relay: This is the absolute coolest Axis Minors action ever designed. The encircled Hungarian 25th Reconnaissance Battalion tries to break free of the Russian grip near Torda, Transylvania in 1944 on boards 17 and 18. This swirling action features Russian Sherman tanks and infantry engaging the Hungarian relief force of 43M Zrinyi II assault guns, while blocking the escape of the Hungarian infantry and armored cars. This scenario will test both players' abilities to attack and defend.

SP138 Lacking Coordination: The British 11th Hussars, 7th Armoured Division defend Syke, Germany against a counter-attack from SS Training Battalion 12, reinforced by 3 Tiger tanks. This 7 turn action is set on boards x and w. With OBA on both sides, you're sure to get a bang out of this little gem!

SP140 Red Valentines: Brian Williams strikes again with another Easter Front masterpiece. This scenario is a tourna-max action featuring a 5th SS Panzergrenadier Division attack against Russians defending Ssagopshin, USSR with a company of infantry supported by T-34s and yes, lend-lease Valantine tanks. This 6.5 turn action is set on boards 16, 19, and 48..

SP141 Broken Beek: Surprize, here's another Mike "The Chisel" Faulkner Market-Garden scenario!. This time the "Chisel" has given us a 6.5 turn tournament action set on board y. In this one, the 82nd Airborne is defending Beek, Hollland in the face of the dreaded Kampfgruppe Becker, with its deadly SPW 250/9s and a SDKfZ 10/4. Somebody, please send the "Chisel" a non-Market-Garden source! This one is destined to become another Schwerpunkt classic!

SP143 The Battle For St. Cloud: This Brook White's scenario design debut. In this 6.5 turn scenario, the Americans must clear the village of St. Cloud of some misguided Vichy-French infantry and Legionnaires. This genius scenario has lots of fog of war and order of battle variations that will test both players' decision-making process.

SP144 One More Day of Freedom: Hugh Downing gave Schwerpunkt this issue's sole PTO action. Using boards 17 and 37, this 6.5 turn scenario is set on Corregidore Island, The Philipines. Here, a mixed force of U.S. Marines, 4th Provisional Battalion and 59th Coastal Artillerymen desperately defend against a Japanese infantry attack supported by Type 89B Chi-Ro tanks and flamethrowers. Can you hold or will you too, join the Bataan Death March?
» Browse other products by Sherry Enterprises
Home Back to Results