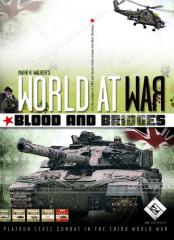 The war is raging on and now it is up to the British and their formidable array of weapons systems to blunt the Soviet spearhead. Chieftain and Challenger tanks, Striker ATGM vehicles, FV-432 APCs, Lynx attack helicopters, Tornado fighter-bombers and others clash headlong into first rate Soviet Guards units outfitted with T-80 and T-64 tanks, BMP-2 APCs, MTU-55 Bridgelayers, SA-13s, Hind E attack helicopters, Su-25 ground attack aircraft and many more. There is only one mission here. Hold the bridges or see Soviet armor on Channel coast.

June 2nd 1985. The War is in its fourth week and the Soviets have blown through the first defensive barriers. The loss of equipment and men has been high on both sides but the Soviets have fresh Guards troops pouring across the Gap. It is now up to the British to halt the advance before the Soviets reach the Rhine River. This afternoon amidst the smoke and haze, recon elements of both sides make contact. The battle for the bridges is underway!

June 3rd 1985. Recon forces collided late yesterday. Intel reports that the Soviet 62nd Motor Rifle Regiment is on the way. The 3rd Queens Regiment moved forward overnight and is dug in for a fight to hold Anhausen! Scouts report armor approaching. Time to win one for Queen and Country…

June 3rd 1985. The 3rd Queens regiment managed to knock the Soviet 62nd MMR back in fever-pitched battle this morning. That was the good news. The bad news is now they have to hold the line against the 74th Guards Tank that is moving into the Bendorf area. Headquarters has responded by sending elements of the Royal Lancers along with a couple helos and an on-call MLRS unit. Will it be enough?

Chieftains on the Warpath

June 5th 1985. Both sides backed off from major action yesterday to regroup and rethink the battle for Anhausen. The British are pushing the 4th Royal Tank Regiment from Irlich into the Anhausen FEBA. The Soviets are pressing Elements of the 48th Guards Motor Rifle Regiment out from Bendorf to get a foothold for a continued rush to the river.

June 6th 1985. After a day of brutal fighting in and around Anhausen both forces pulled back to assess loses and decide how to proceed. The British command decides to make a bold counter-attack against the Soviets regrouping in the area of Rieden, Haln and Bendorf. Elements of the Royal Hussars and the Queens Regiment drive from Irlich to deal out a bit of payback.

Calm Before the Storm

June 7th 1985. The sudden counter-attack by the British forces coupled with days of fighting, shattered nerves and confusion led to an accidental Soviet chemical rocket strike of Anhausen by a couple of Scud missiles a few hours ago. Thousands of civilians and refugees were caught in the attack by the clouds of nerve gas. NATO leaders are discussing a reprisal as the Soviets claim it was NATO fire that fell on the city. Before too much world outcry can gather, the Soviets decide to punch a probing attack to soften up the river defenders…

…and 6 other white-knuckle scenarios.
» Browse other products by Lock N Load Publishing
Home Back to Results