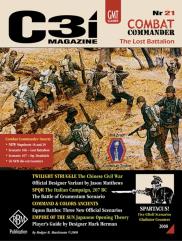 A new 22” x 17” color “CC” mapsheet insert. There will also be new “CC” counters, plus fixes for the Molotov Cocktail counters from CC:Mediterranean.

GBoH fans will be treated to two articles with scenarios and an innovative campaign system in the upcoming C3i Nr21. First, for the new “SPQR Deluxe”, we have “The Italian Campaign of 207 BC: The Battle of Grumentum” by Carlos Gomez of Spain. In 207 BC, as Hasdrubal Barca was crossing the Alps, the consul Gaius Claudius Nero drew the unenviable task of pinning Hannibal in Southern Italy, to prevent the juncture of the two sons of Hamilcar Barca. The maneuvers that ensued resulted in the hard fought, bloody Battle of Grumentum, the prequel to the Battle of Metaurus.

Moving forward over a century, for “Caesar: Conquest of Gaul”, we have “Spartacus!” with five scenarios by C3i GBoH Editor Dan Fournie. This article will feature the Battles of Salinae, Mount Garganus, Picenum, Camalatrum and Silarus River. “Spartacus!” will introduce the new ‘gladiator swordsmen’ unit, and pits the ragtag slave army against a series of Roman commanders and legions. The scenarios for Grumentum and Spartacus are presented for both standard GBoH and Simple GBoH rules. Finally, for diehard “SPQR” fans eager to give their new Deluxe version a workout, C3i will feature “The Second Punic War: A Campaign Game for SPQR and War Galley” by Frédéric Bey of France. This article provides a system to put all 33 of the “SPQR/Module and C3i” scenarios into a strategic framework, and determine who wins the overall war.

For Pax Romana fans, C3i Nr21 will include the article “Pax Romana: Endgame” with two scenarios covering the latter, chaotic years of the Roman Republic, after Rome had defeated all other major powers, but before her rule was stabilized under the Empire. The first scenario “Endgame: Upheavals of the Late Republic (146-50 BC)” is a longer two player version, with a three player variant. The second scenario, “Spartacus and the Foes of Rome (88-55 BC)” is a two-turn four player game.

Both scenarios have special rules to simulate the waves of servile insurrections, civil wars and barbarian invasions that swept the Mediterranean in this period. Look for leaders famous and infamous, including the Romans: Scipio Aemilianus, Marius, Sulla, Sertorius, Lepidus, Cinna, Pompey, Crassus and Caesar; and their foes: Jugurtha of Numidia, Mithridates of Pontus, Tigranes of Armenia, Burebista of Dacia, and, of course, Spartacus!

Fans of “Commands & Colors: Ancients” (CC:A) will be treated to three new scenarios in C3i Nr21. In issue Nr10 of C3i Dan Fournie presented the “Charles S Roberts Award” winning article “EQUUS: Cavalry Battles of the Second Punic War,” including five scenarios for SPQR. Two of these battles have already been presented as CC:A scenarios, Ticinus in the base game, and Castrum Album in C3i Nr20. Now Richard Borg has updated the final three battles for play with his elegant game system — Umbria, 217, Maharbal’s masterful ambush of a hastily marching Roman cavalry force; Agathocles’ Tower, 204, Scipio’s ambush of a large, overconfident Carthaginian mounted formation; and Cirta, 203 BC, a swirling desert battle between Syphax on one side and Laelius and Masinissa on the other, that decided the fate of Numidia. All three battles feature very large numbers of cavalry units, making for unusual, fast moving scenarios.

• 15 Units for the Pax Romana Endgame Article.
• 46 units for the Spartacus/CCoG article.
• 26 Optional units for Combat Commander.
• 5 units for Clash of Monarchs (the word "Exhausted" is now on the back side of the MW units).
• 32 Barbarian Gallic BI unit's with their MA fixed (5 instead of 6).
• 14 SPQR units that fix minor errors:
• The 4 Scorpio units have their MA fixed to 3 on the front side.
• 5 Numidian SK units that were missing their SK code.
• 4 Numidian LI units that were missing their LI code.
• The Surus Elephant Leader's MA fixed to 9.
• 6 Optional cavalry brigades for For the People.
• 1 Pilot counter for Down in Flames.
» Browse other products by GMT Games
Home Back to Results