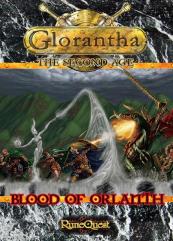 Sold Out
Last Stocked on 3/30/2019
Have one for Sale or Trade?
Blood of Orlanth
by Mongoose Publishing
Category: Role Playing Games
Genre: RuneQuest/Glorantha
RPG - Fantasy

There is a legend that few Gloranthans will ever know. It tells how during the Godswar, in the land which is now called Dragon Pass, Orlanth was almost slain by one of the vile Chaos Gods that rose from the Void and threatened to extinguish all life in the world. To the Orlanthi, this is a foul lie. Yet to a minor, lone cult of the barbarians, it is a terrible truth and a secret shame – a secret they guard forever.

The God Learners have learned a shard of this hidden truth. Arch-sorcerers of the Alliance have mastered a ritual that can use the blood of the wounded Storm God to achieve their own unknowable ends, perhaps even rewriting history and altering the life of Orlanth himself. But the blood must come from this secret myth. Jrustelan agents make their way to Dragon Pass now, seeking to pry the secret legend from the Orlanthi that live there.

Delecti the Inquirer, the traitorous sorcerer, is aware of his former brethren’s machinations. He employs his own agents, Dragonspeakers and mercenaries allied to the Empire, to watch over the conquered Orlanthi of Dragon Pass and ensure the God Learners do not learn the full truth of this legend.

In every battle there is a crucial moment: a fulcrum upon which all hope and despair balance. It is in that moment that the fate of each conflict is decided. It is down to the Player Characters to forestall disaster by any means necessary. If they are successful, only then can they defeat the God Learners’ ambitions before the sorcerers enter the Hero Plane and steal a god’s blood.

This adventure is designed for use with any of three factions - the Player Characters can be Orlanthi barbarians, or God Learner agents, or warriors of the Empire of Wyrm Friends. Each chapter in this adventure presents the same events and challenges from three different perspectives. If using this adventure with existing characters, they should be trusted allies or sworn mercenaries for one of those three factions. The adventure assumes that characters are at least seasoned adventurers at the start of the campaign. If the characters are already seasoned (or even more experienced), then the Games Master will need to adjust the number of foes and the difficulty of the tasks to challenge his players.

In the first section, Revelation, the scene is set. A clash is coming between the barbarians and the Wyrm Empire. Orlanthi villages on the edge of EWF territory are becoming rebellious, and the actions of the characters can sway the loyalty of these border tribes one way or the other, favoring the rebels or the Empire. As the characters travel from town to town, they begin to learn of a secret cult that preserves a myth that is not told by the Orlanthi, a story that speaks of Orlanth's death in his battle with Sh'kaharzeel, the Great Dragon.

The second section, Insurrection, puts the characters in the heart of this doomed Orlanthi rebellion against the EWF. Depending on their actions in the first section, the rebellion may put back the expansion of the EWF by decades, preserving Heortling culture and freedom for generations, or it may be swiftly crushed. Either way, the characters have a chance to become heroes - or traitors. They also learn more of the secret cult.

In the final section, Devastation, the characters enter into a HeroQuest of the battle of Orlanth and Sh'kaharzeel, and their actions on the Hero Plane will shape the future not only of the Heortlands, but of all the world. If the God Learners can gain control of this myth, then their bizarre myth-magic will give them immense power over the foundations of both the Orlanthi and EWF cultures. To command the Blood of Orlanth is to command the world!
» Browse other products by Mongoose Publishing
Home Back to Results