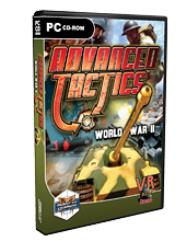 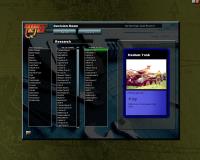 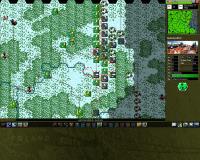 Take Command and chose your Tactics!…

Advanced Tactics is a versatile turn-based strategy system that gives gamers the chance to wage almost any battle in any time period. The first module in this series is Advanced Tactics: World War II, which allows gamers to hop into a Panzer and storm across Europe. Complete with a streamlined interface and an addicting style of gameplay, Advanced Tactics offers a unique and infinitely replayable experience for any strategy fan. Depending on the scenario, you can decide what your towns should produce, which HQs receive reinforcements, how your chain of command is formed, what sort of troop and equipment mix you put in each unit, if you use air, land, or sea strategies or maybe even call in the paratroopers – the possibilities are endless! Almost any type of strategy or tactic and be used effectively in Advanced Tactics.

To round out Advanced Tactics’ replayability, it also features a powerful scenario editor that allows gamers to recreate their favorite historical scenarios or simply fabricate their own fictional conflicts. World War 2 buffs will enjoy Advanced Tactics’ numerous scenarios from the period like: Gothic Line, Afrika Korps, the Russian Front, Endsieg, and more. Furthermore, for players with only the time to play and not create their own scenarios there is a powerful and easy-to-use random scenario generator that will keep gameplay fresh with minimum user input to create new missions and campaigns.

• Random map and scenario generator with optional shroud of darkness and mirror map functionality, infinitely replayable!
• A Wargame Construction Kit-like editor allowing you to make any wargame scenario you like.
• Realistic Supply System that can be harassed by damaging bridges and ports or by interdicting enemy supply lanes with your navy or airpower
• Customizable Chain of Command
• Excellent PBEM cheat prevention mechanism not even re-installing the game will let you cheat.
• Detailed, but fully automated mini battles, with results that show you what’s happened during the battle.
• Engineers can construct roads and fortifications, blow bridges and build airfields
• Aircraft can paradrop, airlift, airsupply, air attack, bomb and do air recon missions
• Excellent Fog of War, depending on your recon level you have full information, partial information or almost no information on enemy units and hexes.
• You can control what all your towns and cities produce.
• Up to 4 research level for almost all equipment; possible to upgrade existing equipment both in service and on production lines.
• Three (3) Great Operational scale WWII scenarios: Ardennes ’44, Africa ’41 and Ghothic Line ‘44
• Two (2) Full Theater WWII Eastern Front scenarios for 1941 and 1942
• A 3 player Europe 1945 scenario giving the Germans a last chance due to the Soviets advancing on the Allies
• Fictional USA and Europe map scenarios, as well as a Diplomacy style scenario
• History Screen in which you can review all moved the enemy made in his turn
• Not just limited to 2 players, scenarios for up to 9 players are included
• Very customizable units; you decide the weapon mix of you divisions!
• Command forces on land, sea and in the air