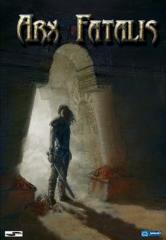 Interactive environments invite players to explore the vast world of Arx as they search out and destroy the evil menace threatening to lay waste to the world. Caves, caverns, underground passages and dungeons are filled with minions of the demonic army and can be cleared only with the use of hand-to-hand combat and a rune-based magic system. Mastering the art of rune casting is a central feature of Arx Fatalis, with more than 50 spells possible when combining more than 20 runes, each with specific effects, mana costs, and formulas.

For Windows.
» Browse other products by Arkane Studios
Home Back to Results