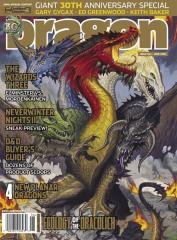 The Return of Gord
by Gary Gygax and K. R. Bourgoine
Watch your coin purse. Gord the Rogue returns in this tale of thievery and mayhem.

A Dark and Stormy Knight
by Ed Greenwood
Have dinner with the Wizards Three and learn the culinary tastes of Elminster, Mordenkainen, and Rautheene. As always, the wizards have a few secrets to share, like this one.

This spell animates up to two pieces of metal armor into up to two variant helmed horrors that fight for you (or fetch, carry, open doors, or perform any other simple action you command). These constructs explode into a spray of metal shards when destroyed. See page 175 of Lost Empires of Faerûn for helmed horror stats. If you lack that source, you can use shield guardians instead.

The helmed horrors created by this spell silently follow your will. If you don't direct them to do anything, they stand idle. Once given a task, they pursue it until completed, even if you turn your attention to other matters.

Unlike most helmed horrors, the ones you create with this spell have no crossbows and make no missile attacks. If destroyed they explode, with effects equal to a shard storm spell (see page 187 of the Spell Compendium: 20-ft.-radius burst, 3d6 force damage to all creatures, Reflex half, spell resistance yes, lasts for only 1 round). Note that the damage is force damage. No metal shrapnel survives.

When the spell expires, these constructs abruptly fade away and the pieces of armor that made them fall to the ground.

Focus: Two pieces of nonmagical metal armor previously worn in a battle. The pieces' condition does not matter (they can be damaged), but all of their metal must be present. They need not be from the same suit of armor. The pieces cannot be worn by you or any other creature while the spell is cast.

Dreadhold
By Keith Baker and Jason Bulmahn
Explore Eberron's inescapable island prison, meet the wardens, and beware the prisoners. Here is just one sample of what to expect.

Prisoner Saeria Lantol
NE female elven lich necromancer 12
Saeria is an elven lich from the island of Farlnen. In 545 yk, she became the leader of the Talons of Ice, a cabal of necromancers who served Lady Vol. In the middle of the sixth century, Erandis d'Vol sent the Talons to spread fear and death across the Five Nations. Initial success made her overconfident, and she was defeated by an alliance of the knights of Dol Arrah, warriors of the Silver Flame, and soldiers of Karrnath. While her followers were destroyed, no one knew where to find the lich's phylactery—so killing her would simply allow her to return elsewhere.

Saeria has been chained to the wall of a deep cell for over four hundred years. She does not require food or water, and as a result she has had no contact with living beings since she was imprisoned. A character in need of information about the Order of the Emerald Claw or the Blood of Vol might be led to speak with the known confidant of Erandis d'Vol.

Planar Dragons
by Mike McArtor
Four new wyrms from other worlds, including the Astral Plane, the Abyss, Elysium, and Hades. Casting plane shift just got a bit more risky.

Plus a Whole Lot More!
An exclusive look at this year's Gen Con, Ecology of the Dracolich, Class Acts, Sage Advice, comics, a catalog of upcoming Wizards products, and more.
» Browse other products by Paizo Publishing
Home Back to Results