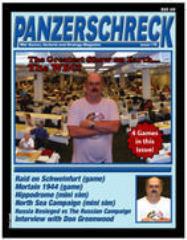 Panzerschreck #15 contains FOUR complete games, on a variety of scales and topics.

MORTAIN 1944 is a two-player game simulating the (limited) German panzer offensive versus the Americans in France, August, 1944. It uses a variation of the ASSAULT ON CHERBOURG system (from issue #13), and is a "conventional hex wargame" of the battle in the bocage, using daily turns. It contains 80 double-sided, die-cut counters, 8.5" x 11" full-color cardstock map, and full rules, including many options.

RAID ON SCHWEINFURT is a solitaire game depicting the USAAF raids in 1943 against the Schweinfurt ball-bearing factories in central Germany. The player controls the planning and execution of each massive B-17 raid, assigning target, fighter coverage, number of waves, any "diversionary" raid, and so on. It includes a "role play" option enabling you to play as though you are one of the crew members of a participating Flying Fortress, thus adding a layer of excitement to play. Fly over Germany with up to 400 bombers in a game that plays in much less than an hour! Contains 60 double-sided die-cut counters, 8.5" x 11" full-color cardstock map containing all game tables, and rules.

HIPPODROME is a multi-player (works best with 3 to 5 players) "Euro style" mini-sim card game of Roman chariot racing. The emphasis here is on strategy, not on becoming a demolition derby! Includes the biggest map ever published in
Panzerschreck (11" x 25") in two parts, rules, with game markers and chariots on cardstock in full-color, which must be cut out prior to play, and you'll need to provide a standard deck of cards. (Yes, there are still whip attacks and ramming!)

NORTH SEA CAMPAIGN is a strategic level World War I naval mini-sim for two players, where Britain's Grand Fleet squares off versus Germany's High Seas Fleet for control of the North Sea. Includes 8.5" x 11" full-color cardstock map, rules (including solitaire options), dozens of individual rectangle ship counters (dreadnought, battlecruisers, and pre-dreadnoughts) printed in full-color on cardstock, which must be cut out prior to play. The entire campaign plays out in UNDER an hour... and includes optional tactical battle rules for those of you who like a little more detail.

AND THAT'S NOT ALL! Besides containing fun, playable games, Panzerschreck is a magazine which provides plenty of interesting gaming articles, variants, and reviews. Read on...