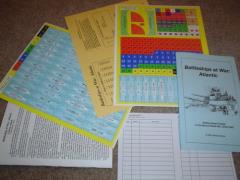 Battleships at War: Atlantic uses the game system used in The Mighty Hood (published in Panzerschreck #14). Among its sixty ships are the historical battleships, battlecruisers, heavy cruisers, and light cruisers from five nations (Great Britain, Germany, France, Italy, and the USSR). The game recognizes that naval combat between surface ships involved three main factors (speed, armament, and armor), and its very playable system gives importance to each of these factors. Ships are individually rated for speed, bow, broadside, and stern firing, defensive armor (including vulnerability to plunging fire), flotation, fire direction, use of torpedoes. Each turn represent approx. seven minutes of real time; the game is played on the floor or table top, with one inch representing 1000 yards. Gamers may use any of the scenarios provided (such as the battles involving the Bismarck in May 1941, the Battle of the River Plate, the scattering of arctic convoy PQ-17, the Battle of the North Cape, and many more), or can craft their own. The Convoy Attack folder which is included offers a simple solitaire method of play. Overall, the game avoids complex combat procedures and nearly endless calculations and die-roll modifiers; in fact, all game tables necessary for play fit nicely on the two-sided Reference Card. Ships and game markers must be cut out prior to play.

Designed by Gary Graber, the editor of Panzerschreck, Battleships at War: Atlantic offers veteran and rookie naval gamers the chance to recreate WWII naval action with just a few or dozens of ships.

Everything you need to recreate WWII surface naval battles in the Atlantic, Mediterranean, and Baltic theaters, 1939-1945!
» Browse other products by Minden Games
Home Back to Results