War Between the States 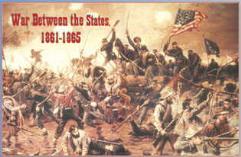 War Between the States, 1861-1865 simulates the American Civil War from the opening shots at Fort Sumter to Lee's surrender at Appomatox. During that conflict, over 3 million men fought from a total pre-war population of some 30 million. About half-a-million died or were permanently incapacitated by disease or combat wounds. It was the great crisis of American history to date.

War Between the States uses three maps to cover the major theaters of operation from Galveston, Texas, to St. Joseph, Missouri, and from Philadelphia, Pennsylvania, to Jacksonville, Florida. A total of 1400 counters represent various units and game effects. Game turns represent the passage of a week of real-world time, with "cycles" intervening during which players carry out such routines as production, blockade, construction, politics, etc. Each game turn is divided into two player turns, during which one player or the other may move his ground and naval combat units on the map and attack his opponent.

There is an off-map roster system to track the fluctuating strengths of the ground combat units. The combat system requires both players to secretly and simultaneously choose one of several combat options. Cross-referencing those choices determines which combat results table is used to resolve each battle, thereby determining the extent of strength point casualties to be assessed against each player's units, as well as other combat effects. Heavy losses normally result only when both players desire a major battle.

Logistics is crucial in the game. Supply must be expended in each cycle on existing forces or they are exposed to possible attrition or elimination. Combat supply may be expended as a result of battle, and it's difficult for a force of any size to operate for long when out of supply. It is the slow movement of supply trains, coupled with the time necessary to repair railroads and fund supply depots, which limits the extent and depth of each player's strategic offensives.

War Between the States can be played as a huge campaign using all three maps and simulating the entire war from beginning to end. That requires hundreds of man-hours. Alternatively, six scenarios are also offered, covering the eastern campaigns of 1862, 1863, and 1864, along with three others covering the western campaigns of those same years. The scenarios vary in length from eight to 24 game turns. When playing them, players don't execute the intervening cycles, since production and related matters are built into their systems. The scenarios are also designed to play on just one or two maps.

The American Civil War was the first modern war. It was overwhelmingly a war of attrition between nation states. Given the enormous personnel and economic superiority of the Union over the Confederacy — a consideration reflected in the game — the South usually loses. It therefore normally a question of how quickly the South loses, compared with the historic outcome, which determines who wins each game.
» Browse other products by Decision Games
Home Back to Results