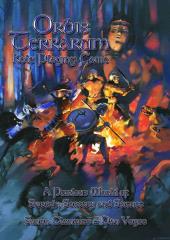 Open this weighty tome and you’ll find a world waiting to be explored. A world of high peaks and steaming jungles, sheer ice and endless sand, ancient ruins and thronging cities. A world inspired by the picaresque journeys of Fafhrd and the Gray Mouser, by Conan, Elric and Nifft the Lean. A world of violence and intrigue, clashing cultures, magic and daemons and lost secrets. Orbis Terrarum is a science-fantasy roleplaying game inspired by C.J Cherryh’s Morgaine Cycle and Merovingian Nights, Joe Abercrombie’s First Law series and the Scott Lynch’s Gentleman Bastards. By Jack Vance’s Dying Earth, Howard’s Hyborian Age, Fritz Leiber’s Lankhmar and Lyndon Hardy’s Master of the Five Magics. It’s a world colorful and deep, filled with heroes righteous and fervent, holy men and magi, swashbucklers and rogues. The living world of Uma is the ultimate sandbox for your RPG adventures, uniquely customizable to YOUR needs and YOUR vision of its people and secrets. Everything you need to bring your version of the world to life is in these pages: A world of ingenuity and invention, where science and sorcery work together. Brutal and bloody combats, where skill and imagination counts. Factions, history, magi and mysteries, each can be tailored to your style and unique secret history of the world. Breathtaking geography, from the mighty peaks of the World Keel Mountains to the white desert dunes of the Kutsal and the beautiful but deadly blue ice valleys of the far north. A savage and alien ecology. A horde of daemons and their scheming masters, the Daemon Princes. Monsters and beasts not drawn from earth, unseen in any game before! Vibrant cultures to explore, from ancient, decadent, daemon-summoning Dromal to the fierce and pious Battari, their ancient nomad enemies. Savage Hutzlunr barbarians, among whom life is cheap and severed heads whisper secrets of the future. Colorful, roguish, swaggering Raphaelians with their orange sashes and geometric magic of sigils and runes. Refined intellectual Pelosians, masters of science and war. Wild Dummonii tribes and their ten thousand gods, and the primitive and mysterious Uru from a distant land. Wise Yerwi, masters of the living magic of earthpower, and half men from the Daemon City of Nostapyrax. So take up a mighty hutzaxe, a flashing sabre or rune-blasting spitzroden and set out for gold and glory
» Browse other products by Orbis Terrarum
Home Back to Results