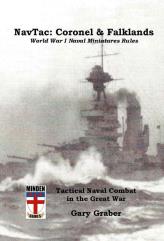 NavTac is Minden's most tactical naval system, covering Great War battles with individually rated warships rendered at 1/3000 scale, and five minute turns. NavTac: Coronel & Falklands deals with early war battles with several historical and hypothetical scenarios, including, naturally, the Battle of Coronel, and the Battle of the Falklands in late 1914.

NavTac: Coronel & Falklands is a 66-page illustrated book, which includes full rules (standard, optional, and advanced), facsimile ship counters, game tables, eight scenarios, and historical commentary. You may use your own naval miniatures to play, or the ship counters provided. Ships from Great Britain, Germany, France, Italy, Austria-Hungary, Russia, and Turkey are included. Instructions are written with 1/3000 scale in mind, but provision is made for converting effortlessly to other popular scales.

The game is based on Fletcher Pratt's classic system, but uses tables and dice rolls instead of range estimation for fire combat. The system is further enhanced by new procedures for ranging fire, critical hits, shell splashes, weather, ammunition rules, and many other small additions which, when used together, increases authenticity with little effect on playability.
» Browse other products by Minden Games
Home Back to Results