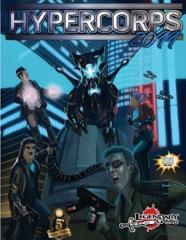 The simultaneous tachyon flux of 1876 and 2076 forever changed the world, introducing a myriad of new races to Earth from other dimensions before the strange portals closed with the coming of the 20th century. The 200 years since have been filled with the miraculous rise of alter sapiens, the demigrant struggle for equal rights, and the ascent of the planet’s true masters: hypercorporations. Earth is firmly in the grip of these monolithic institutions, gradually being stripped away as more and more aspects of life are codified and monetized. For most this is a bleak and repetitious existence but for some it can be much more—for operators it offers an avenue to vast power, prestige, and wealth.

Hypercorps 2099 is a campaign setting and rule system for use with the 5th Edition of the world's most famous roleplaying game, taking adventurers into a cyberpunk future and granting them superheroic abilities that raise the drama of their tabletop game to unprecedented levels using the Hyper Score system. As operators the party will work for and against hypercorporations to frame executives, pull heists, sabotage laboratories or shipments, and whatever else their plutocratic overlords pay them to.

» Browse other products by Legendary Games
Home Back to Results