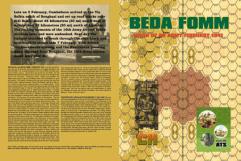 SIDI SALEH, near BEDA FOMM, 7 FEBRUARY 1941: on a cold, clear morning, with only 30 tanks left, General Bergonzoli once again decided to use them frontally in an unavailing assault on the ring of British anti-tank guns and hull-down armour. Ammunition had arrived for the British, but the defense still looked and felt thin (as if it could not hold, even though it had done so for two days). Following a heavy artillery concentration, the Italian armor tried to ignore the British armor and concentrate on guns and infantry. The Italians unlimbered the big guns figuring they would be of little value if captured anyway. Finally, the Italians used all of their armor—twice as much as any previous attack—in a massed attack. If they had done this with 60, 80 or 120 tanks the previous day, they likely would have smashed through to freedom. The Italian armor fired on the move and engaged the anti-tank guns of 106th Royal Horse Artillery.

In heated gun duels, the relatively exposed British guns were silenced one after another and the infantry was overrun. Battery C of 4th Royal Horse Artillery was engaged in hand-to-hand melee and requested and received permission to bring down 25-pounder artillery on themselves. The battery commander, with his batman and cook, drove round the east flank in the last portee left and knocked out five Italian tanks with five shots. The rest of the Italian armor was taken care of by 25-pounders firing at point blank range and the Rifle Brigade’s anti-tank guns. The last threat of Italian armor was stopped right at the HQ officer’s mess tent. Even though this was a frontal assault, it showed what might have occurred if the Italians had concentrated their armor. Another four medium tanks, some armoured cars, and about 30 truck-loads of Italian soldiers broke through the net and escaped. The Italian infantry gave up in large groups once the protection of their armour was lost. 101 tanks were counted on the battlefield. 48 had been hit by 2-pounders, 8 by other guns, 6 were uncertain, and 39 had been abandoned intact by demoralized crews. 4th Armoured Brigade lost 4 cruiser tanks and overall British losses were light. 7th Armoured Division’s entire casualties were just 9 killed and 15 wounded. And so it went into the history books: two understrength British Commonwealth Divisions destroyed nine divisions of the Italian 10th Army using excellent tactical methods with close co-operation of tanks, artillery, and infantry.

This was the last time for a while that such methods would be used with success by the British command. As the British went on the defensive, and transferred troops to Greece, no resistance was met in a further 100 mile drive to El Agheila and down the coast road to Sirte. They would have been able to bully their way into Tripoli if they had moved quickly, thereby removing the key landing port for the Axis. The Germans were amazed that they did not. O’Connor was bitterly disappointed and later commented, after having had the opportunity to talk with several German and Italian officers in Tripoli (presumably after O’Connor’s capture)—they all said that there was nothing that could have stopped him. Such Italian units that remained were completely disorganized and demoralized. To quote from The Rommel Papers: “When a commander has won a decisive victory it is generally wrong for him to be satisfied with too narrow a strategic aim. This is the time to exploit success. If the pursuit is abandoned on the quartermaster’s advice, history almost invariably finds the decision to be wrong and points to the tremendous chances which have been missed.” Hitler had remarked to Rommel, looking back, ‘Don’t for one second relax your determination to follow up, whatever the odds; don’t be like the British, who had a chance of getting to Tripoli, and didn’t take it.’

Years ago the original historical BEDA FOMM map and scenarios went out of print. They've been asked for again and again, but have never seen the light of day, until now! The result is the framework of a new ATS historical module, the first ever for the ATS system. A larger map, nice details, and the scenarios to play out the battle that culminated at and near 'The Pimple', an insignificant terrain feature, unimportant that is, until Italian dreams of conquest died there, at the hands of an intrepid band of British soldiers, Tommy Atkins in armored cars and rickety Cruiser tanks of the early varieties!
» Browse other products by Critical Hit
Home Back to Results