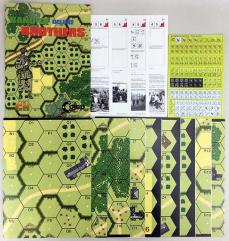 Haut Fornel , Normandy, France, 6 June 1944: The afternoon of D-Day wore on with numerous disjointed actions in the Normandy countryside for the Screaming Eagles. Preceding the main body of C Company was a point of twenty-three men under Lieutenant Morton J. Smit. As the point approached the village of Haut Fornel, a truck suddenly pulled up and twenty Germans leaped out. Smit unloaded on them, dropping ten, and scattering the remainder. Meanwhile, the main force of Company C under Captain Hancock heard the firing and moved forward to investigate. Just then Hancock saw a German battery—two 88s on halftracks—enter the village and halt just to his front.

Hancock split his force into two groups, seventeen men on a wide sweep to the left and another seventeen under Lieutenant Jack Borchard, to come up from the right. Action intensified quickly, as another gun-towing truck was seen and a German platoon entered the village on foot. Private William Kelly managed to disable one of the 88s with a Bazooka round (the other disappeared). Enemy mortar and machine-gun fire took its toll and halted the American attack. The Germans tried to push forward but were stopped by accurate machine-gun and mortar fire from an 81mm mortar commanded by Lieutenant Rance Cotton of 1st Battalion’s HQ Company. The tables turned, most of the German soldiers turned and fled. Hancock and Cotton then went forward and rounded up thirteen prisoners.

We heard what you wanted and here it is AND then some. The Deluxe experience for ASLers is long dead. Or was. With the entire line getting the love it needs (read: the retro graphics that make you feel 'Hill 621-ish' all over again, color-touched scenarios, the counter art you crave) there is exactly zero reasons NOT to do fun and unique things with the resulting games, maps, and more. To that end, we bring you Band of Deluxe Brothers, which brings you 8 Drop Zone Normandy scenarios in a new printing to play on the largest-hexed map in the history of the system. Plus, while you need modules bringing you Americans and Germans, as well as the ASLRB, you also get a copy of the second printing of the BoB Normandy counter sheet.

» Browse other products by Critical Hit
Home Back to Results