Uniforms of Waterloo in Colour (1996 Edition) 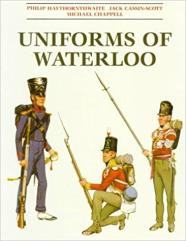 The most famous three days in military history occurred less than two hundred years ago, and they are still the most studied, and the most fascinating, for the seemingly insignificant mistakes and new tactics that changed history forever. This full-color guide to the uniforms and troop movements will make the action more real and the movements easier to follow, as you envision the Belgian countryside battles that ended Napoleon's career and changed the European political landscape for generations. Here you'll find not only maps of the battlefield and charts of troop movements, strategies, and tactics, but also the full range of personalities, weapons, and uniforms. Over 200 full-color illustrations, with detailed captions, can help you identify all ranks of combatants, from Britain, Brunswick, France, Hanover, the Netherlands, and Prussia. The paintings accurately picture the major field commanders, including the Duke of Wellington, Napoleon, and Generalfeldmarschal Bluecher, as well as the full range of fusiliers, grenadiers, voltigeurs, officers and troopers, artillery men, the rocket corps, infantrymen, and other participants. Special attention is given to the details of uniform facings, rank lace, plumes, bonnets, badges, sashes, and greatcoats -- everything necessary to re-create this decisive battle.
» Browse other products by Arms and Armour Press
Home Back to Results