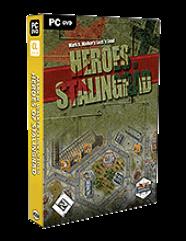 The Lock 'n Load franchise comes to the PC with Lock 'n Load: Heroes of Stalingrad. Designed by Mark H. Walker and programmed by elements of the team responsible for bringing you Panzer General Online, Heroes of Stalingrad remains faithful to Lock' 'n Load's ease of play and immersive format, while incorporating all the advantages of playing on your office flat screen.

The game features two, branching campaigns. One that is playable from the Soviet side and one from the German point of view. The campaigns are story driven, using graphic novel-type panels to propel the plot. A turn-based game, Heroes of Stalingrad retains Lock 'n Load's engaging impulse system while adding features, such as flanking fire, hidden units, and residual machine gun fire, that would just be too fiddly for the board game.

In each campaign gamers will not only need their tactical wits as the fight company-sized battles in, and on the approaches to, Stalingrad, but will also need to manage their troops in the campaign interface. It is in the campaign interface that they decide who to take into to battle, how to spend their precious resource points, and whether to lead a tank-heavy for, vulnerable to enemy infantry in the streets of Stalingrad, or a less mobile, infantry only, contingent.

Heroes of Stalingrad ships with 12 stand-alone missions for those who want to jump right in to the fighting. There are bridge seizures, Partisan ambushes, and even a reprisal of several of the scenarios from Lock 'n Load Publishing's fast-selling Not One Step Back.

As you have come to expect from Lock ‘n Load Publishing, the art is superb. David Julien, Marc Schwanebeck, and Nicolas Eskubi have combined to make soldiers, tanks, and maps that pull you into the conflict and won’t let go. The game includes, Soviet Guards, Rumanians, Partisans, and about a quarter-jillion types of German squads, not to mention (but we will) MG34s, DP28, T-34s, T70s, PzIIIj, on and on.

•Two story-driven campaigns based on the battles for Stalingrad in 1942.
•Twelve stand-alone scenarios that let you dive right into the action.
•Beautiful map art by Marc Schwanebeck, Band of Heroes and Not One Step map artist.
•Luscious "counter" art by David Julien and Nicolas Eskubi, depicting the men, women, tanks, weapons that fought in the battle that marked the highwater mark of the Third Reich.
•Razor-sharp artificial intelligence that will challenge even the most clever tactical gamer.