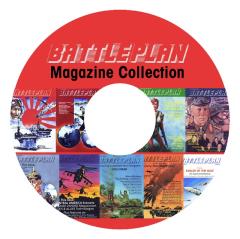 This is the complete collection of Decision Games 3W's Battleplan magazine that was published from 1987 to 1989. Past into Print is presenting this out of print, hard to find magazine collection in PDF format on DVD via an official license from Decision Games.

Battleplan was an ambitious magazine devoted to providing variants, scenarios, and articles on game strategy for wargaming products by a variety of publishers including Avalon Hill, Victory Games, SPI, Milton Bradley, and GDW.

Published between 1987 and 1989, the magazine had a great deal of content to appeal to war gamers, including articles and materials for Ambush!, Squad Leader, Advanced Squad Leader, Up Front, World in Flames, Third Reich, Axis & Allies, Fortress America, and many other games.

The periodical lasted nine issues, before it was folded into the Wargamer, Volume 2.

The DVD contains all nine issues of the series, including all original variant inserts, countersheets, scenarios, and cards. A complete article index is also included.

» Browse other products by 3W
Home Back to Results