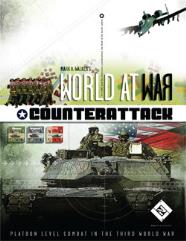 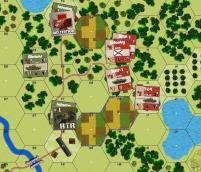 A scenario expansion pack for Blood and Bridges and Into the Breach.

World at War: Counterattack recreates the American and West German counterattack into the southern flank of the Soviet thrust into West Germany. The battles occurred just after the events chronicled in Blood and Bridges, and prior to the final battles for Paris.

Nine scenarios comprise the module. Four are stand alone, another three make up one campaign, and four more build the second campaign (two of the campaign scenarios can also be played as stand-alone battles). See below for additional details on the scenarios.

The module uses a similar campaign system as the one that we employed in Battles within Battles. Winning scenarios awards the player with refit points, these points can be used to repair damaged units, buy new units, or buy unique skills for your units and leaders The system rewards the gamer who conserves his forces. Win the scenario, but decimate your forces, and you’ll lose the war…. Or at least this small piece of it.

World at War: Counterattack includes a full-color 26-page rules and scenario booklet, 10 counters (die-cut counters, if you choose the professionally printed option), and one spanking new, 8.5” x 11” map (on c

Here's what you get.