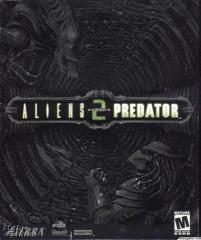 On planet LV1201, ancient alien ruins have been discovered. The Weyland-Yutani corporation sets up a research facility in the area, to study and unlock the secrets of the excavation. When xenomorphic (alien) eggs are found, Dr. Eisenberg is assigned command of the scientific progress. Weyland-Yutani also hires a band of mercenaries, under the command of discharged General Rykov to act as security of the facility. As time passes, observation pods are set up to observe an artificial xenomorphic hive. The xenomorphs however manage to escape containment and the resulting chaos sends out a distress call, which attracts the attention of the "Predator" alien species, as well as dispatching a colonial marine vessel, the USS Verloc, to render aid. Three intertwined campaigns tell the story: that of human marine Lt. Harrison, a newly hatched xenomorph and a Predator clan leader.

Aliens Versus Predator 2 is a first person shooter. Players can choose to begin a campaign as Alien, Predator, or a Colonial Marine, each with their own unique abilities and weapons.

The Marine plays as a standard FPS, with the player needing to pick up weapons, ammunition and health items. The screen shows the player's health percentage as well as armor. Some of the weapons include flamethrowers, miniguns, grenade launchers, rocket launchers and smart guns. The marine also carries a motion tracker which displays movement around the player. To see in the darkness the marine uses a shoulder-mounted flashlight or night vision, both of which drain battery power (which recharges on its own after a time). The marine can also toss flares which burn for a short time. In the single player mode, Harrison is a technician and handles a wielding torch and a ComTech Hacking Device which can be used to "hack" certain circuit boards.

The Alien plays much more stealthily, requiring the player to hide in the darkness and choose its moments of killing carefully. The alien has various stages of its life cycle, all of which tend to leave it with no weapons beyond its own claws and teeth, although some alien forms also feature a tail which can temporarily stun enemies. Depending on the alien's stage of development it can jump 6 feet, switch between normal and night vision modes, climb up most surfaces, pounce forward at targets in a fury of claws and bite the head off defeated foes to regain health.

The Predator on the other hand features superior weaponry and abilities but also uses its stealth to properly hunt opponents. It can jump several feet, use a cloak generator, regain health by using the medi-comp in the wrist, recharge energy quickly using the Energy Sift, and switch between several visual tracking and zoom modes built into the hunting mask. Many of the Predator's abilities use energy, which is displayed on the screen along with health. The Predator's weapons are designed for hunting and include: wrist blades, the combstick tribal spear, a spear gun, a plasma pistol, a shoulder cannon which fires balls of plasma, a bladed disc, remote bombs and a net gun to entangle the enemy. In single-player, the Predator is also able to hack certain circuit boards using the Charge Emitter.