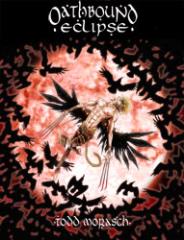 Seven years now I have known myself, and though to many it may seem I have been idle and slack, I have in fact honed my craft and filled my head with the phenomena of the land I fashioned in my imprisonment, a land much apart from the rest of this Forge. Eclipse it is called… a land at the top of the world, the whole of which lies in an impossible crater, a break in the earth. Shunned by both suns, the land knows only shadow. Its inhabitants are those who do their work in the dark: thieves, cut throats, slavers, shapechangers, vampires... yet the dark has its lighter side as well, drawing artist, musician, and philosopher for its candle-light and clarity.

This is a domain of wild fungus forests, impossibly deep caverns, ink-black seas and shimmering cities. Here are long forgotten horrors that defy description, hiding in the darkest of dark places. Here are reckless pioneers, hoping to bring order to this realm that they might profit from the secrets and treasures hidden deep in the shell of the Forge.

Here in Eclipse I have walked, at times as a blind beggar, others as a thoughtful nobleman, and even rarely as my Seraphim self, gathering knowledge, personal accounts, illustrations, and even the odd recipe. I have drowned myself in politics and plant life, spoken to children, kings, warlords and have even risked conversations with the few here who might be capable of harm to one such as me. The wealth of knowledge I have gained could fill a hundred volumes, but in this short tome I will lay out for you what is best suited to allow you to make of the world what you want. All that I have complied here—from my disparate writings and humble illustrations, to the works of slaves, concubines and conquerors—is presented for your pleasure.

» Browse other products by Epidemic Book Co.
Home Back to Results