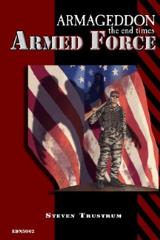 Sold Out
Last Stocked on 5/25/2017
Have one for Sale or Trade?
Armed Force
by Eden Studios
Category: Role Playing Games
Genre: RPG - Horror

The war to end all wars is underway, and humanity finds itself set upon from all sides. Although all manner of mythical creatures now fight alongside it to survive, only mankind has the numbers, determination and sheer tenacity to save itself from everything born of Darkness that wishes to see it undone.

Armed Force provides detailed information on the American forces waging war against Leviathan’s massed armies around the globe, including just about everything you’ll need to play as anything from a lowly Army recruit to the ass kicking and name taking elite, such as Nave SEALs or Delta operators. Along with these materials are valuable intelligence on the war’s progress, including the broad strokes of both America’s and the CoR’s tactics, strategies, and goals for their respective forces.

To meet this challenge, Armed Force offers you the following (and more) for the coming battle:

• Over 60 new Qualities (including the new Military Quality category), over 20 new Disadvantages, rules for Taint, and a wealth of new and expanded skills

• An arsenal of over 100 pages of new equipment, weapons, explosives, and vehicles

• New rules that transform the environment into an enemy, covering avalanches, extreme temperatures and weather, terrain, the dangers of water pressure, and more

• Details on American and CoR military services and units, including over 20 sample CoR soldiers for quick employment in your games

• New items of power, Incantations (including those of Taint), Immortal powers, Taint powers, and rules governing the affect of Taint on equipment and weapons

• Over 10 new creatures, including the insane Brain Box and insidious infiltrator, the Skin-Walker

• Ideas and suggestions for running a military-oriented game, including a tabled system for randomly generating an adventure’s framework to help get you started.

The war to end all wars is underway, and now the time has come for you to pick up your rifle, lace up your boots, and join the fight.
» Browse other products by Eden Studios
Home Back to Results