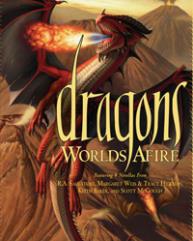 Sold Out
Last Stocked on 12/2/2015
Have one for Sale or Trade?
Dragons - Worlds Afire
by Wizards of the Coast
Category: Novels & Comics
Sub Category: Novels
Genre: Book - Fiction - Fantasy

For the first time ever, five writers from four different settings are gathered together in a single beautiful coffee table book. There is one story each from the foremost authors in the Forgotten Realms, Dragonlance, Magic: The Gathering, and Eberron worlds. Preceding each story will be a beautiful, full-color plate illustration of a dragon.

Ancient beasts imbued with magic, and prone to madness. Masters of a world where they are kings among men. Legendary creatures few have ever seen, and lived to tell the tale. Eldritch constructs bent to the service of godlike wizards. From four worlds of magic and mystery, one monster rises above all others to threaten death, offer hope, spread fear, or horde treasure. No matter what the world, only a dragon can set it, and the imaginations of millions, afire. Four of the most exciting shared worlds in the history of fantasy come together for the first time in one volume, drawn together at last by the mighty dragons of myth and legend.

If Ever They Happened Upon My Lair
By R. A. Salvatore

There was something preternatural, some power unbound by the limitations mere mortals might know, something godlike and beyond the sensibilities of the dwarf. Gone were any thoughts of drawing a weapon against so magnificent a beast. How could he presume to challenge a god? Who was he to even dare ask such a creature to think him worthy of battle?

Principles of Fire
By Keith Baker

What lay before her was no adventurer’s tale. The silver dragon was tangled in the wreckage of the ship, its head still hidden inside the shattered vessel. It was crumpled and twisted, but Zaehr guessed that it was over eighty feet long from the tip of its muscular tail to the hidden jaws. Its hind legs had been shattered by the impact, and Zaehr noticed that even its blood looked like liquid silver, leaking out from between the armored scales and hissing against the flames. She touched down on the cobblestones next to the dragon’s left hind foot. Even its toes were larger than she was.

The dragon lunged like a striking adder and coughed out a glowing sphere of white-hot energy. The sphere coalesced into a solid ball of electric fire and hurtled down toward the western end of the bridge. Dropping like a comet, the crackling missile plowed through the bridge’s wet wood pilings and into the heavy clay below.

R.A. SALVATORE has published numerous Forgotten Realms novels, most of which have been New York Times bestsellers. He is also known as the best-selling author of the Star Wars: Episode II: Attack of the Clones novelization from Del Rey.

WEIS & HICKMAN are the original co-creators of the Dragonlance mythology. Together they have co-authored numerous Dragonlance novels and short stories.

KEITH BAKER’s Eberron setting was chosen out of 11,000 submissions to become the first new Dungeons & Dragons setting in ten years.