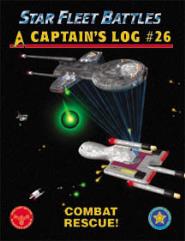 Two exciting fiction stories (Romulans and Gorns battle over the Kishawk and its load of politicians; a lone Federation dreadnought protects the vital logistics convoy from a Klingon squadron), a class history of all nineteen Kzinti strike carriers, and a detailed diagram of Klingon phaser controls.

Paul Scott writes the longest Victory at Origins article ever, and we have term papers and a Ryn tactical primer.